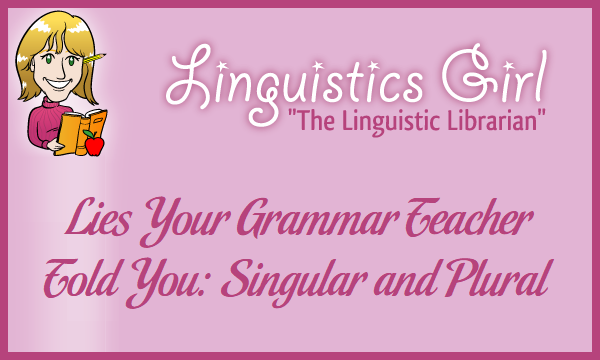 I recently shared a photo across my social media accounts of the grammar textbook that I currently use with my oldest. I included the following caption: “I always have to fix my kids’ grammar books. Plural means “not one.” If you have zero or less than zero of something, you use the plural form: ‘I have no sisters’ or ‘It is -10 degrees out.’ #grammar.” While I received some applause, I also received some disheartening comments that claimed that defining singular as “one” and plural as “not one” adds a layer of complexity beyond the abilities of children of a certain age.

Grammatical number refers to a grammatical category of nouns, pronouns, adjectives, determiners, and verbs that expresses count distinctions. Number in English specifically refers to the distinction between singular and plural. Some languages have other number categories such as dual (two), trial (three), and paucel (a few). Old English had dual forms in the first and second persons (wit “we two,” ġit “you two”). 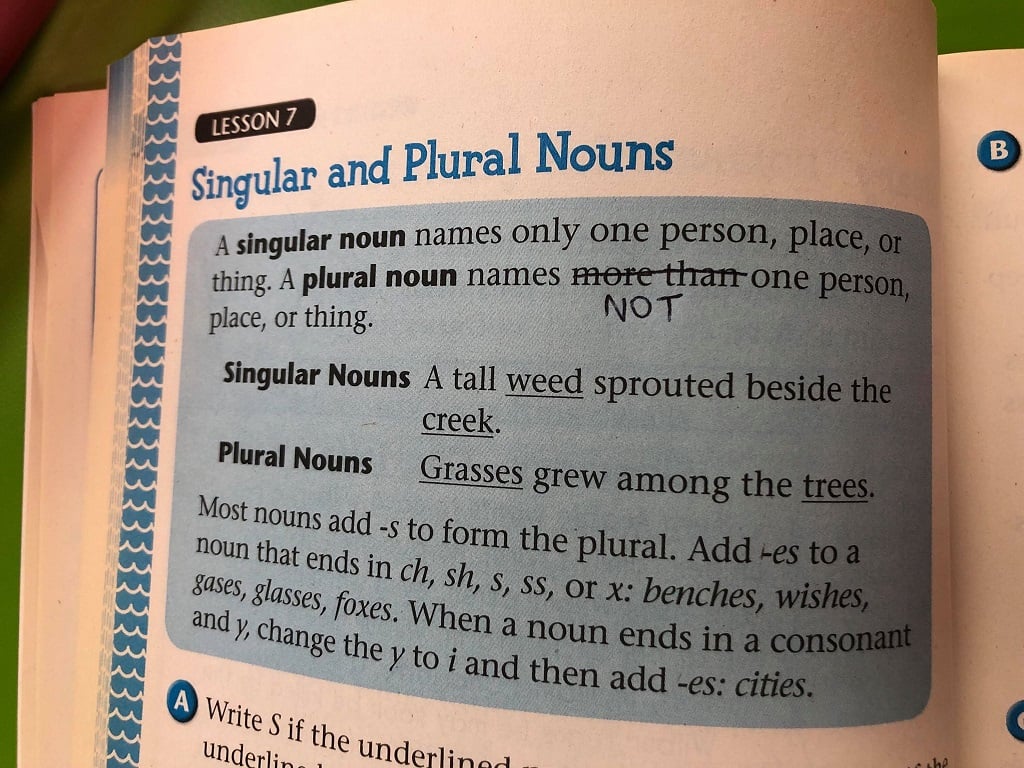 Wikipedia provides the following definition of plural: “Most commonly, therefore, plurals are used to denote two or more of something, although they may also denote more than fractional, zero or negative amounts.” In English, plural forms most often refer to more than one, usually more than one noun. But the definition “more than one” is incomplete. Take, for example, the following noun phrases:

The numeral 1 and indefinite article a are singular, denoting the noun degree as singular. The noun degree is also unmarked, which in English also denotes a singular. The numerals 2 and 70 and determiners a few and many are plural, indicating more than one degree, which require the use of the marked degrees. However, the problem with the definition of plural as “more than one” arises when the phrases 0 degrees and -10 degrees. The numerals 0 and -10 indicate “less than one,” but the noun that follows is the marked plural degrees. Defining plural as “more than one” is clearly incomplete because English uses the plural to indicate values less than one as well as more than one. Thus, a more accurate definition of plural is “more than one and less than one,” or, more simply, “not one.”

Children are smart, and those who acquire English as a first language intrinsically understand that plural means “not one.” English speakers learning to count will say “one apple, two apples, three apples.” If you take away all the apples and ask a native English-speaking child to count the remaining fruit, the answer will be “zero apples.” English speakers acquire the definition of plural as “not one” and use plural forms accordingly. Why teach falsehoods like “plural means more than one” to children in elementary grammar classes just to have to reexplain the complete truth later? Children are perfectly capable of learning “singular means one, plural means not one.”

Another tweeter posed the following scenario in which someone with a single child answers the question Do you have children? Possible answers include the following:

The use of the interjections yes or no have no bearing on the form of the noun child. The answers Yes, I have one child and No, I have one child differ pragmatically. However, child remains singular because the numeral one is also singular. The noun and determiner must agree in number. The form of the question Do you have children? also does not affect the form of the answer. The pronoun one is also singular because the antecedent is one child, not *one children or *children. A singular determiner cannot precede a plural noun as in *one children and a singular pronoun cannot replace a plural noun phrase.

Another tweeter also inquired about the use of the negative article no and the number of the following noun. The simple answer is the both singular and plural nouns can take the negative article no. The complete explanation is that some determiners lack grammatical number and can therefore appear with both singular and plural nouns. Both the and no lack grammatical number. For example:

The meanings of I have no cat and I have no cats differ because of the use of the singular versus the plural. But just like the definite article the, the negative article no lacks grammatical number. The and no are neither singular nor plural. The number of the noun cat is encoded only in the noun (cat versus cat), not the determiner. The definition of singular as “one” and plural as “not one” remains cromulent.

Finally, the question of grammatical number and fractions/decimals also arises. Is the noun following a fraction/decimal singular or plural? All of the following forms are attested:

English tends to use plural forms with decimals and fractions, but use varies. Two valid arguments are at play. The first is that numbers less than one are not one, and thus the form that follows is plural. The second is that fractions and decimals are part of a whole (part of one), and therefore the singular follows. In the case of 1/3-cup and 0.5-cup, the number compounds with the noun just like in 2-foot board versus 2 feet of board. Many recipes use the singular form after fractions as in 1/3 cup of flour and 0.5 cup of flour. The forms 1/3 cups of flour and 0.5 cups of flour follow the definition of plural as “not one.” The form 1.0 cups of flour is also possible when 1.0 is read as one-point-zero or one-point-oh because zero and oh are “not one.” We can also expand our definition of singular to “one or less but greater than zero.” English speakers, however, have not arrived at a consensus on dealing with grammatical number in regard to fractions and decimals. Using a singular or using a plural after parts of whole are both acceptable. The key is to consistently use one form throughout an entire work.

To summarize, number is a grammatical category of nouns, pronouns, adjectives, determiners, and verbs that expresses count distinctions. Singular means “one”: one cat, a dog, an apple, the computer. However, the common definition of plural as “more than one” is inaccurate. English speakers use plural forms for numbers greater than one as well as zero and negative numbers. Thus, a more complete definition of plural is “not one.” 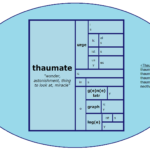