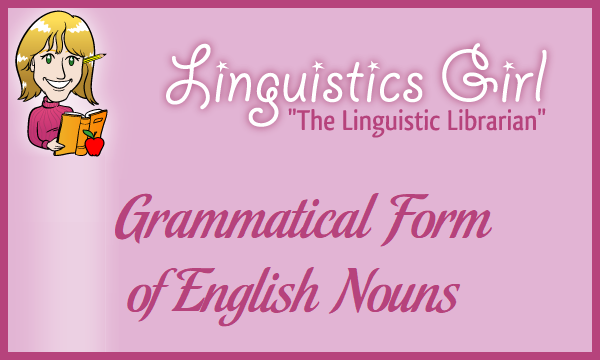 Traditional grammars define nouns as “words that refer to people, places, things, and ideas.” Pronouns are a subcategory of nouns. Noun phrases are phrases formed by a noun functioning as the phrase head plus any determinatives, modifiers, and complements. In English, prototypical nouns and noun phrases perform eleven grammatical functions:

English nouns first express number. In grammar, number refers to quantity. Prototypical nouns in English may be either singular or plural. Singular nouns refer to only one “person, place, thing, or idea.” For example, the following nouns are singular:

Plural nouns refer to two or more “people, places, things, or ideas.” For example, the following nouns are plural:

English nouns also express possession or lack therefore. In grammar, possessive nouns indicate a possession of or some other relationship to another word or phrase. For example, the use of the possessive in the boy’s bike indicates that the boy owns the bike. The use of the possessive in the little girl’s mother, however, indicates a familial relationship between the little girl and the mother. Prototypical nouns may or may not show possession. For example, the following italicized nouns are not possessive:

The following italicized nouns are examples of possessive nouns:

Although many nouns can show possession, only nouns that refer to people and other living things take the possessive clitic (‘s or s’). For example, both woman and turkey are people or other living things and can therefore show possession in The woman’s face showed her disgust for cleaning her turkey’s cage. However, the nouns hotel and table, which refer to inanimate objects, typically do not have possessive forms but rather function as noun phrase modifiers as in The hotel manager needs to repair the table leg.

Nouns are notionally defined as “words that refer to people, places, things, and ideas.” The internal structures that distinguish nouns from other grammatical forms in English grammar include number and possession.

Noun is a grammatical form. 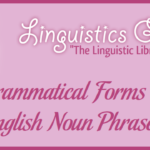 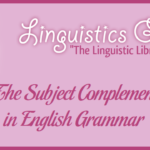