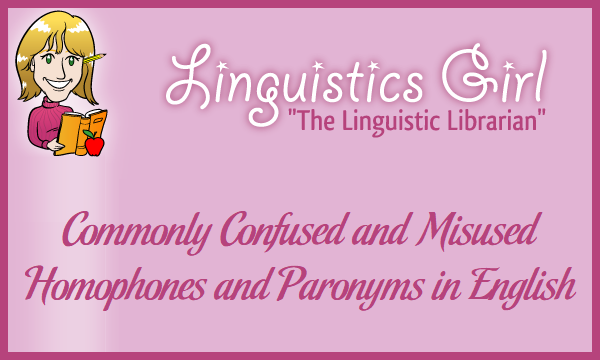 Writers often confuse words that sound the same or similarly in written English. The following sections explain the differences in spelling and meaning for the most commonly confused and misused paronyms and homophones in the English language.

Paronyms are words with the similar sounds but different meanings. In written English, writers often mistake one paronym for another.

The store accepts all major credit cards except American Express.

advice – noun – recommendation regarding a decision or course of conduct
advise – verb – to give advise to, to offer counsel

After my father advised me on the matter, I took his advice into consideration.

The effect of the tornado affected the decision to evacuate the county.

Your allusion to the illusion in the movie is most transparent.

I assure you that the company will ensure to insure your most valuable possessions.

choose – verb – to pick, to elect, to decide
chose – verb – simple past tense form of to choose
choice – noun – an option, a decision

I chose to choose the ethical choice.

The compliment from my boss complemented the celebratory party.

decent – adjective – fair, good enough, okay
descent – noun – a way down, a drop to a lower position
dissent – verb – to disagree, to differ from

The experienced hiker dissented to taking the decent descent down the mountain.

We shall gorge on desserts once we leave this godforsaken desert!

The SWAT team defused the bomb while the police diffused the crowd.

elicit – verb – to draw out, to bring out, to evoke
illicit – adjective – unlawful, breaking social norms

The interrogator will elicit the truth about any illicit activities.

loose – adjective – unattached, not joined
lose – verb – to cause something to cease to be in one’s possession, to not win

A loose wheel caused the driver to lose the race.

The doctor prescribed a new medication and proscribed grapefruit juice.

than – conjunction, preposition – used in comparisons
then – adverb – at that time, next

Then select a cover larger than the couch.

Homophones are words with the same sound but different meanings. In written English, writers often mistake one homophone for another.

The secretary added another ad campaign to her to-do list.

My aide will aid you with the delivery schedule.

ail – verb – to cause to suffer, to hurt, to be ill, to suffer
ale – noun – an intoxicating liquor, beer

Drinking too much ale in the evening ails me in the morning.

capital – noun – city, money and wealth
capitol – building in which any legislature meets

The school children took a trip to the capitol building in the state capital.

cite – verb – to quote, to reference
site – noun – a place
sight – noun – the ability to see, something seen

The mere sight of the beautiful site caused me to cite Shakespeare.

For four hours the pastor babbled in front of his congregation.

hear – verb – to perceive with the ear
here – noun, pronoun

Did you hear the sound over here?

its – possessive determiner, possessive pronoun
it’s – contraction of it is, it has

It’s the cat that broke its tail.

I knew the new neighbors as a child.

know – verb – to be certain or sure about, to be acquainted or familiar with
no – interjection, determiner

His depravity knows no bounds.

peace – noun – a state of tranquility or harmony, a state free of oppressive and unpleasant thoughts and emotions
piece – noun – a part of a larger whole

Finding the missing piece of the puzzle brought me peace of mind.

The principal alphabetic principle places A before B.

their – possessive determiner
there – noun, pronoun
they’re – contraction of they are

They’re going over there where their car is parked.

The two women went to the mall too.

Which witch broke her cauldron?

Who’s the idiot whose glass left a ring on my coffee table?

your – possessive determiner
you’re – contraction of you are

You’re your own worst enemy.

By learning the differences in spelling and meaning of the most commonly used paronyms and homophones in the English language, writers can prevent embarrassingly mistakes. 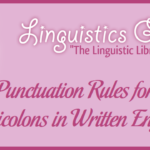 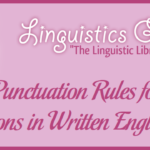