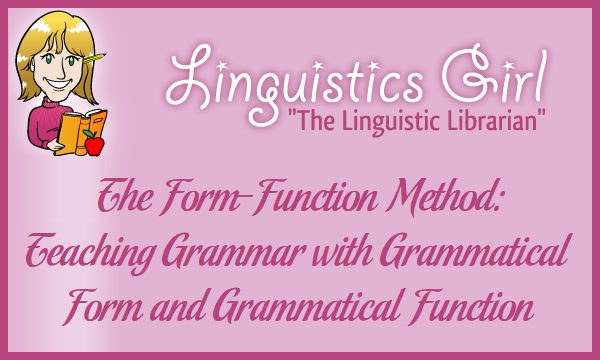 Grammar is an area of the language arts that teachers often find difficult to teach and students likewise find difficult to learn. The Form-Function Method for teaching grammar, however, simplifies the subject by breaking down grammar into the two most basic linguistic elements: grammatical form and grammatical function. The Form-Function Method allows for the study of the grammar of any language.

Tenets of the Form-Function Method

The Form-Function Method for teaching grammar is based on four principal tenets:

Begin using the Form-Function Method to study grammar by learning the four tenets of the method. Subsequent grammar lessons will elaborate on each tenet.

Grammatical form also includes the internal structure of words, phrases, and clauses. Internal structure can be described as the possible inflections of words and the possible syntax of phrases and clauses. For example, prototypical nouns can be marked as singular (dog) or plural (dogs) and marked for the possessive (dog’s and dogs’). Prototypical adjective phrases consist of an adjective (small), an adjective and an adverb phrase (very small), or an adjective and a prepositional phrase (small at the waist).

Each grammatical form can be the topic of an individual lesson. For example, the form of the adjective in English includes taking comparative (bigger and more beautiful) and superlative (biggest and most beautiful).

Note that different grammars give the same grammatical functions different names. For example, the subject complement in English is often divided into two categories (predicate nominative and predicate adjective) depending on the form of the word or phrase performing the function. Each grammatical function can be the topic of an individual lesson, or similar functions can be included in the same lesson. For example, the function of grammatical subject in English can be performed by noun phrases, prepositional phrases, verb phrases, and noun clauses.

Most English teachers love to talk about metaphor. And I think most students at some level can grasp the idea of metaphor. So why not use a metaphor to clarify the difference between grammatical form and grammatical function, looking at people and their occupations in an imaginary world?

But what if, in our metaphorical world, there are only three occupations that people can have. Pretend that the imaginary people can choose to be mothers, fathers, or teachers. These three jobs are the only jobs available. And, since occupations are something people do, we can call these jobs functions. Therefore, the three functions of people are:

To summarize the metaphor:

Applying the Metaphor to Grammar

Now apply the idea of the metaphor of people and occupations to English grammar by looking at two grammatical forms: noun and adjective.

First identify the functions that can be performed by the two forms. Nouns perform eleven main grammatical functions:

The function that can only be performed by adjectives is:

The functions that can be performed by both nouns and adjectives are:

To summarize the functions of nouns and adjectives in English:

Hopefully my comparison of people and occupations to grammatical forms and grammatical functions will help grammar students better understand the difference between form and function. The Form-Function Method is a pedagogical strategy that simplifies the teaching of grammar for teachers and the learning of grammar for students. Just remember: form does not equal function, but more than one form can perform the same function, and one function can be performed by more than one form. 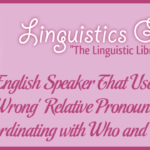